M is for Mutiny: History by Alphabet 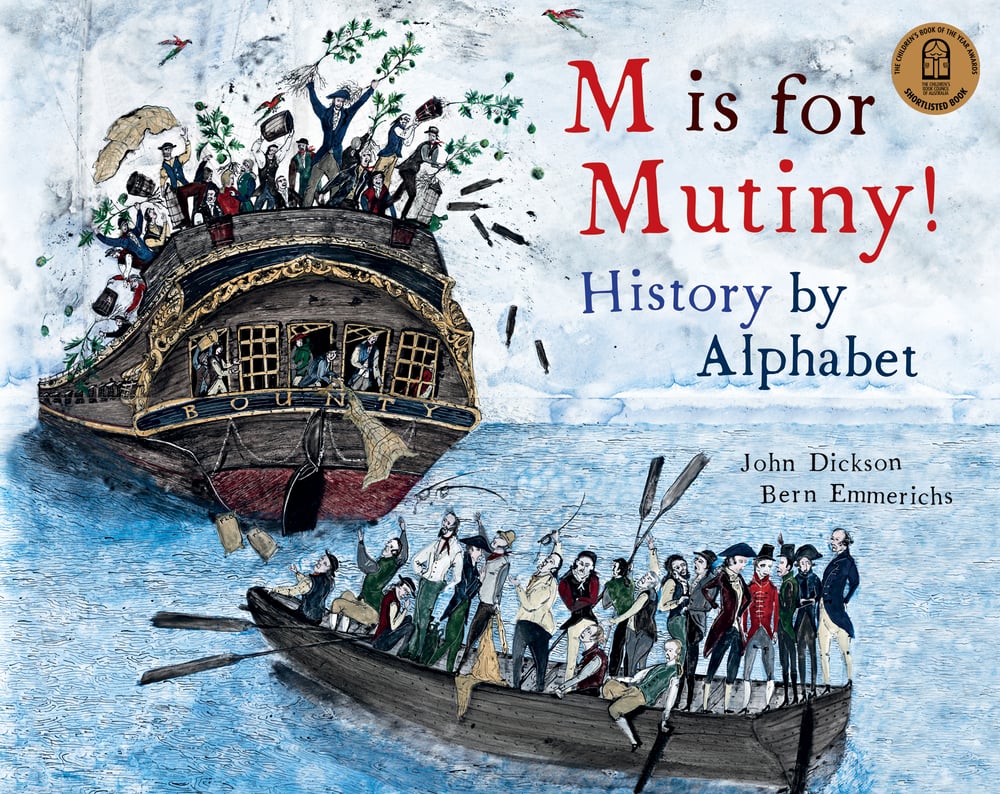 In the late 18th century, ragtag groups of Europeans started to arrive in Australia. Most were convicts, some were soldiers, a few had just run out of choices. They blundered onto an ancient land that had been peopled for 60,000 years. They wanted to make it just like home. They cleared the land, they fenced it, they paved it and they put buildings on it. All the while, the country’s first peoples watched on, bewildered by these clumsy immigrants and their mysterious ways…
M is for Mutiny! History by Alphabet  is a taste of the intriguing history of Australia and the many entry points for children to explore further. Why did Sir Joseph Banks hate bananas? Did anyone like William Bligh? Where is Yemmerrawanne?

Reviews
“A different view of Australia's history is presented in this intriguingly illustrated picture book, with information to hold readers' attention and drawings that will make the eye linger on each page.” ReadPlus
“M is for Mutiny is an excellent tool for introducing history and for questioning the perspectives we think we know.” Kids’ Book Review
"Visually stunning..." Sydney Morning Herald
Download the teacher notes for this book.
Children's Book Council of Australia short-listed judges report
"This is an intelligent and sophisticated look at the people, places and concepts found in Australian history. Unlike other history or geography alphabets on the market, this book takes its reader further than mere places and times. It spreads its magic into commentary, extending its audience. What a stroke of genius to begin the book with A is for Acknowledgement to Country and how respectful for the author to add his own acknowledgement of country on the very first page. There are the usual suspects such as C for Cook, as in Captain, E for Endeavour and K for Kangaroo but the readers are also treated to such complex issues as I for Island introducing the idea of Terra Australis IN-COG-NITA or T for Terra NULL-IUS – the land belonging to no one or N for Nurture which explores Caroline Chisholm’s fight to help female convicts. The book can be looked at as an introduction to Australia’s past and how it will affect its future, but each letter can be used as a discussion point whether in the classroom or around the dining-room table. The artwork by Bern Emmerichs is again superb. Bern created large hand painted porcelain tiles which were then photographed for the illustrations. Some of them have been overlaid with the text from the author. The overall effect is mesmerising. Captain Cook is spectre like, a Dickens character perhaps, with the shadow of a shark behind him. What are those gold chains he wears and why does the flag drip with blood? So many references for discussion. Also, on the endpapers, Bern has given such detail to each figure portrayed. She seems to have created a personality and story for each one. This is a thought-provoking book, confronting and a work of art."
0 items $0.00